September 01, 2018
PHOENIX - On Friday night during game 3 of the semifinals against the Seattle Storm, the Phoenix Mercury had a different mindset and outcome. There were determined not have a 3-0 ending. Despite the Phoenix Mercury loosing one of their starters - Stephanie Talbot (concussion), Yvonne Turner stepped up in a big way.  Turner, Bonner, and Griner kept their season going scoring 19, 27, and 21 points respectively. 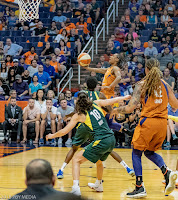 The Phoenix Mercury ended the first quarter with a 10 point lead, This gave them a small cushion as they only scored 16 points to Seattle's 19 points before the half. (42-35 Phoenix). Turner finished with 19 points, 7 rebounds, 6 assists, and 3 steals. She stated "I always make sure I'm doing what I need to do, knowing what our schemes are and when I need to step up, I have to step up. I was able to do that tonight." With this mindset and physicality, the starting line up change was a good mix up against the Storm which ended their 10-game loosing streak in the WNBA semifinal games.

Diana Taurasi struggled the first three quarters of the game. It wasn't until the fourth quarter before Taurasi scored her first basket. It was not the typical Taurasi that we are all used to see playing on the court, but her 8 points, 7 rebounds, 3 assists, and 1 steal kept the crowd on their feet in the fourth quarter at Talking Stick Arena.

Sue Bird and Jewell Lloyd joined Taurasi with the struggles throughout the game. Bird is Seattle's third leading scorer, but was scoreless in game three with 11 assists while playing 29.39 minutes. Lloyd playing 30.25 minutes ended with two points, three defensive rebounds, and one steal. 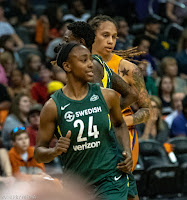 Historically, Seattle struggles with away games in the playoffs as they lost the last eight post season games on the road. Dan Hughes said "We were playing catchup for most of the night but it never quite felt like we were out of it. We would kind of get back in the game and they would separate."